Thank you for your interest in CARNEGIE – Artist of Mystery!  Our focus is to bring the strongest MAGICAL segment to your show! Dean has been making appearances on TV since the mid 1990s. Today, not only can he do MAGIC for your viewing audience. He is also an authority on magic history and HOUDINI. And if you are looking for another unique angle, he is a magician who also paints, and what does he paint? Magicians! Visit artistofmystery.com to see the artwork.

There are several things that producers usually look for when bringing on a magic guest.

Sawing a Spectator or Host In Half

This is a simple table with some wooden stocks that hold a person down to the table top. A metal bow saw is introduced, and while the spectator lies upon the table, stomach down with their face towards the audience.  Carnegie places the large saw into the stocks and begins to saw away. In the process several pieces of wood or cardboard are cut as the blade visible makes its way through the spectator. The stocks are then removed to show the saw blade  is now underneath the spectator! This routine is always light-hearted and fun. It is not meant to be a dramatic or dangerous piece. No harm will come to the spectator.

Whenever Carnegie chooses magic for TV, he prefers routines that  involve the host and have a strong impact.  Typically, these effects use cards, coins, borrowed finger rings, rubics cubes and many other objects. These effects are “alignnone”] 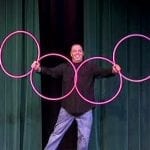 small, so the camera can come in tight, but they play very large for the viewing audience.  Carnegie is happy to present parts of his stage act for the studio audience and viewing audience. In this case, there are a lot of routines to choose from. One of the most popular is a routine with finger rings borrowed from audience members. There are also routines that don’t require the participation of audience members or host, like the  Linking Hula Hoops. This is one of Carnegie’s signature routines. It has a running time of 3 minutes. It is presented silently to music. It’s very visual!  Click here to view a video of the Linking Hula Hoop routine.

Mind Reading effects is very popular today. Though this branch is less visual, the impact upon the hosts and viewing audience can be even greater. Because of the nature of mind reading, the host or spectators must be involved in these experiments and demonstrations.  Carnegie loves to do effects which involve the studio audience. He has several routines that everyone in the audience. Some involve props like cards. Some do not require any extra props at all. The great part about interactive magic, often the home viewers can participate as well! 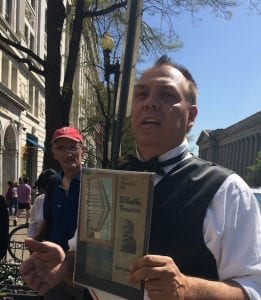 Are you preparing a segment on HOUDINI and would like a guest with knowledge on the subject? Carnegie is one of the countries leading authorities on the life of Houdini. His blog, themagicdetective.com is the most popular Carnegie Magic Historian[/caption]general magic history site on the internet. There are over 300 articles articles on Houdini, and hundreds more on other magicians. Carnegie has first hand experience in escapology and performing magic, so not only can he talk about Houdini, he can demonstrate many of his escapes! He can also talk about other magicians through history. Did you know that magicians have been visiting the White House to perform since President James Polk was in office? Abraham Lincoln often hosted events where famous magicians of the day performed. In fact, Abraham Lincoln is tied to a number of stories of 19th Century magicians. Did you know a famous magician once saved an audience of a thousand people from a theatre fire through a magic trick? There are so many fantastic stories in the world of magic and Carnegie is more than happy to share them!

VIRTUAL MAGIC
Now in the days of the Covid Pandemic, LIVE performances are generally out of the question. So Carnegie now specializes in Virtual Magic. He includes this in all his online magic shows but he also can do this for Talk Shows. He can present magic Virtually. So either the Hosts and do a hands on demo together with him or he can show them some great magic that they still participate in. It’s the hottest form of magic now in the 21st Century and few performers can do it well. Carnegie is one who excels in this style.

That’s right MAGIC on the radio. Carnegie can do mind reading experiments with the radio host or with callers. He can also talk about magic, magic history, magicians who have died tragic deaths, the true and false stories from the life of Houdini and much more. Listen to an interview (Jan 2015) on SpacedOutRadio where Dean talks about HOUDINI, magic history, and his own performing career. (Two Hour Interview)

One of Carnegie’s latest interests is in the paranormal, specifically, GHOSTS. Because he has a background in theatrical magic, he is a natural ‘debunker’ of fakery. Sadly, many ghost sightings and supposed haunted buildings are untrue. However, there are many sightings and haunted places that have no earthly explanation for the paranormal activity that takes place. Carnegie has many stories to share on this topic of ghosts, spirits, and the paranormal.

If you’re ready to schedule a show, simply fill out the form to the right.  Please let us know about your event so we can get you the proper pricing information and let you know about availability. Feel free to describe your event in the comments box. Once you complete the form, you’ll be sent to our e-promo-kit with more information on our various shows.  And by all means, if you’re seeking more information, you’re welcome to fill out the form to gain access to our e-promo-kit as well. If you’d prefer you may contact us via phone or email.